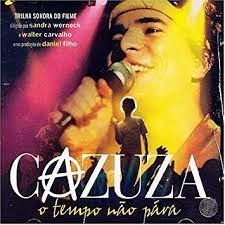 Cazuza – O Tempo Não Pára (Cazuza – Time Doesn’t Stop) is a 2004 Brazilian biographical film directed by Walter Carvalho and Sandra Werneck, about the life of singer Cazuza. It stars Daniel de Oliveira as Cazuza. The film is based on the book by Cazuza’s mother, Lucia Araujo. The film won a Best Actor Award from the São Paulo Association of Art Critics Awards. It was one of the most successful films of the year in Brazil.

Focusing on Cazuza’s personal life, the film chronicles his early career, his subsequent success, his drug use and his promiscuous lifestyle. It starts out in the early 1980s in Rio de Janeiro, showing his usual day-to-day life until he joins the band which would become Barão Vermelho. It then shows the band’s rise to fame and its frequent “mutinies” which led him to pursue a solo career. Later, it depicts his struggle against the AIDS virus and his final days.